The Paradigm SE Titanium razor is machined in flyover country right in the heartland of the United States. The fit and finish is superb and the shave is nimble and efficient while still being gentle.

The Paradigm SE razor has tamed the notoriously aggressive Artist Club blade. It has a mild feel, yet still efficiently plows down the whiskers. The mild and efficient shave enables shaving against the grain even in difficult places or for those with sensitive skin. It is a two piece design, with a unique slide off cap that makes blade changes simple. It weighs in at a perfect 80 grams, and in spite of its substantial size is highly maneuverable.

I got into single-edge razors about 2 years ago with the Asylum RX, which, as my skin kept getting thinner with age (I'm 74), became hazardous for me to use with a Feather Pro blade. I switched first to Pro Guards and then to Kai's guarded blades and the Asylum became as harmless as an AS-D2 but with much greater shaving efficiency. Still, I managed to raise the occasional bleeder, especially on the chin area under my lip which has lots of creases. Then the Paradigm came along, and all I can say is WOW! I've been using it every shave for about 5 months now with Feather Pro blades and have yet to get a bleeder with my 2 pass and touch-up shaves. It's incredibly smooth and efficient and a real pleasure to use. The method for blade lock-up is ingenious, although it's a little stiff to slide open at first. Proper shaving angle is more natural than any razor I've ever used. The only thing I could wish for is for more knurling on the handle. As far as I'm concerned, any razor that can completely tame a Feather Pro blade deserves adulation. 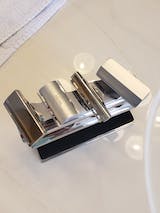 This is the best SE razor I have used to date and not at all sorry with my purchase. While expensive, I plan to get many years of service out of this beautifully crafted razor. Weight and balance is just perfect. One of the few razors that I have used in the Artist platform that truly tames the blade while making for me one of the most efficient and smooth shaves I have experienced.
Phil at Bullgoose is great! I ordered the razor and received it across the country in two days, that is excellent service!

I have been shaving with the Paradigm SE since I received it. Really great razor a bit less efficient than my SS General but way more forgiving and significantly smoother. I can shave everyday with no build up of irritation and it’s the perfect weight, very easy to use and maneuver around the face. The way the blade is loaded on the razor is unique and easy to do, I recommend this razor to anyone that wants an easy to use, efficient razor. If your preference is really aggressive and super efficient razors like R41, Ikon Tech, Asylum RX, ATT SE2 you might want to borrow one of these first. All that said if you shave everyday, the Paradigm SE can give you a BBS with one buffing pass ATG with no risk of weepers or irritation, can’t do that quickly with an aggressive razor as easily as the Paradigm SE.

My ATT was too heavy. My Asylum was better. My Paradigm is just right. Beautiful fit and finish. Thank you!

I own numerous high end expensive razors. I love aggressive razors. Upon seeing the Paradigm SE, to be honest I wasn't impressed. For some reason I talked myself into making the purchase. I can't express how pleased I am with the decision. The shave is smooth, comfortable, close and easy to use. Love this razor.

One of the smoothest shaves ever. Fit and finish is superb. Balance is excellent. Easy to load. I’m lucky to have gotten this razor. I look forward to using it every day. My rotation now includes the OneBlade, Rex, and this razor.

Wow! I have been calling Paradigm SE Razor the Bugatti of SE Razors. The craftsmenship it top level and the type of shave you get is no different I have found the shaves I have been getting are very smooth and efficient. If you have the spare coin for the razor I highly recommend that you get one you will not be disappointed. I am beyond pleased with my purchase no buyers remorse here.

One of the smoothest SE Razors I own! The build quality is top notch! Loading the blade is unique and easy to accomplish. The handle takes a little getting use to, but not unmanageable.

This razor is amazing. It lives up to the Paradigm reputation but adds a new twist. The shave is mild, but nicely efficient! The results are a no irritation shave against the grain, even with sensitive skin. Previous Paradigm products have tended to run a little hot. This one is just right!

Without a doubt, the Paradigm Titanium SE is easily one of the absolute best razors I have ever used. You will absolutely love this very efficient, very smooth and beautifully made razor! Get one while you still can!

This razor is so smooth I can do my first pass ATG, with a second pass in trouble areas I am BBS without irritation. Easiest SE to load and the quality and finish are top notch

This is the smoothest razor I've ever used, and it is also incredibly efficient! The finish is top notch. I enjoy the two piece design with the top cap that slides on/off and snaps into place and holds the blade very securely. Good audible feedback. Very comfortable shave that leaves me free of whiskers and free of irritation!

The Art Deco design is cool. The finish is a mirror shine. This is my first AC type razor so I was very careful using it. The shave was very very efficient yet mild. No chance of getting a nick. One of the closest shaves that I have had with zero irritation afterwards. Very impressed! This is a whole new game.

Let's face it, I'm a sucker for beautifully made razors that promise the world ( and often fall far short). This one delivers. I'm using it with a Kai Captain Mild blade, and it is simply great to use. No regrets here! 23 reviews
Alert subscription has been saved.
Failed to save subscription.
Subscribe to back in stock notification