The idea for the Asylum injector razor has been percolating since the summer of 2012 when I met with Larry Calderon (a product engineer) in a Pasadena IHOP restaurant.  The goal was to produce a more nimble version of the Asylum Rx that took injector blades.  The execution of the design proved more difficult than we anticipated so, the razor was put on the back burner for nearly ten years.

The Asylum Injector is produced using 316L stainless steel. It is a bit lighter than the Rx weighing in at 99g and the shave is ever so slightly milder than the Rx. Due to the smaller head, it is more nimble than the Rx and is an excellent choice for those with a goatee. The last two pictures show the the Asylum injector next to the Asylum Rx for perspective.

Blades for the Asylum Injector can be found here

I remember that Phil, many years ago when this project had gotten off the ground, announced the version that became the Asylum Artist Club razor. But he also hinted that and injector would eventually be produced. At that time the modern market lacked injectors and I remembered that very well, until the present time. I bought the first generation of Asylum AC razors, then the seconds generation and they were excellent. But what I wanted was that injector razor -- I love injector razors! By this time there some companies that produced a modern injector razor -- Supply had gotten in the the game, Parker (with several generations of a Pal remake), but then the impossible happened. Phil had come out with the promised Asylum injector razor after many years. A long, long time waiting! And it was worth all the time it took. I shaved with every type of injector blade known to man, but the best were Schick Proline B-20 blades. I'm a three-pass type of shaver, but what I noticed a lot of times were the increased efficiency and after a two-pass shave I'd be done. The heaviness of the razor lends itself to a gentle hand in shaving. I eased off a bit, compared to my other injector razors, and enjoyed the closest shaves I gotten with anything but a straight razor. I am thankful Phil has put so much of his time into developing this razor, however long it took! The best looking injector razor by a far shot and the best performing as well. 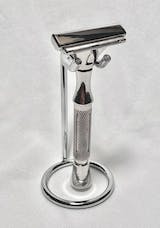 A wonderful razor! I really enjoy the feel of this razor, and I am getting some great shaves. I think it shaves like a Schick Type M set to a higher setting. 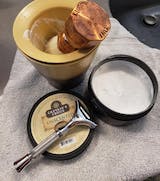 Fantastic! Amazing! 2 1/2 days growth of beard gone to BBS in 2 passes with my new razor and the Schick Blades! A very comfortable smooth shave, I was very pleasantly surpeised at how well the razor handled. Thank you very much for all the time and effort you put into making that amazing instrument!

Although I agree with one reviewer that the name is slightly misleading, as the Asylum Injector is not actually an injector razor, it lives up otherwise to its advance billing. It is beautifully styled and solidly made, with perfect balance. I have gotten excellent shaves and I am one who shaves every single day. I think because of that it usually takes me three passes to get that BBS shave each time. My only criticism of the razor is that loading the blade could be easier, but an instructional video that Phil made (typical of his great service) helped me a great deal, and each time I have gotten better and faster at it. Practice does make perfect. Until I started using an injector razor, I used open comb doubler edge razors, and I still like to use them, sometimes in combination with this razor or another injector that I own. In short, this is an excellent razor using the injector blade style and if you have the chance to get one for your collection, don’t hesitate.

The exterior finish on my razor is perfect and very nice. The razor is a bit heavier than most vintage injectors being steel , but it doesn't affect the shave for me. This is solid and well constructed. Some may find the loading to be a bit fiddly, but I seem to have no problems at all. I have always wanted a premium injector razor and this is it! And it shaves as good as any razor I own, better than most.