Pereira Shaving Soap with activated charcoal is a modern version of an old Pereira family recipe. Camilo, the man behind Pereira Shavery, incorporated activated charcoal into the formula for its cleansing and detoxifying properties. If you are prone to break outs or acne, Activated Charcoal Soap can help gently exfoliate and draw out dirt and oil that can clog pores.

The scent of the soap can best be described as aquatic and soft floral. Unlike many of the modern artisan soaps, the scent of this soap will not overwhelm your senses. It is pleasant and just strong enough...no headaches will be induced.

Pereira charcoal soap lathers very very well and gives a great glide during the shave. This is a surprisingly good soap. Stays in rotation. Nice aroma too.

Pereira Shavery Activated Charcoal Shaving Soap has good lather and scent is OK (mild). However, I find it too messy for frequent use. Unless you shave in the shower, the charcoal leaves residue on towels and requires thorough cleaning of the brush. I also like a nice white creamy looking lather – not a “dirty” looking grey.

This stuff is really good. It lathers gray because of the charcoal, but it's slick and gives great protection for a three pass shave. It's in my rotation and it will stay there.

My shaves with this soap are the best I've had, of any soap or cream. I've tried probably a dozen creams, of which Castle Forbes is my favorite. My favorite soaps have been Oleo and Stirling, though I've gotten good to great results from RazorRock (especially the lanolin formulas), Tcheon Fung Sing, and others. But this Pereira soap with the activated charcoal has provided the best shave I've ever had in the two weeks I've been using it.

The scent is pleasant enough, though it's a little light and airy to be among my favorites. There's nothing wrong with the scent; it's clean and very pleasant. It reminds me of the Truefitt&Hill 1805, but lighter and with less ' flower'. But both are nice, fresh, clean scents. The Pereira's scent is nice, even if it is too innocuous to really grab my attention.

Regardless, the lather is so good that the scent could be far less pleasant than it actually is, and it wouldn't matter; the shave quality is that good. Simply put: the Pereira's lather is fantastic; it is easy to make, super slick, and very protective. The shave quality is better than anything else I've tried. Closer, smoother, with no weepers, nicks, irritation, etc. I've used this soap with the two razors I regularly use: a fairly-aggressive Merkur Futur, wide open, and loaded with either Feather or Gillette Silver Blue Blades; or, a fairly mild third-generation OneBlade Core with Feather blades. In general, the Futur is prone to (at least) weepers from even slight lapses of concentration, or if used with a lather that isn't up to the task. And the Core - even in it's third and vastly-improved, closer-shaving third iteration - still does not shave as close as the Merkur (though it is far, far more forgiving ... the Core is foolproof, while the Futur is anything but).

With the Pereira, the Core shaves closer than with any other lather, and leaves a fantastic, super-smooth post shave. And the Futur? Weeper-free; and ridiculously, 'oh, wow!' smoot...

Read a review of Pereira soap. I have been a wet shaver for ten years and this is the best soap I have ever used. It is now what I use exclusively. Easy to load on the brush and it provides the closest shave without any irritation or weepers of any soap currently available. And,at less than $15, it blows away many soaps that cost much more.

Purchased as a gift to a friend. He enjoys it so much he said he'll use it as his exclusive soap until the tin runs out.

As for the soap, I got a tub from the European supplier before BullGoose carried it. I find that is has a complex scent without being overpowering that opens up significantly when lathered. It is among the slickest soaps I've shaved with, and while not quite as cushioning as some of my soaps, it's better than many other commercial and artisan offerings. As an added bonus this soap dont dry my skin out, and don't leave a greasy feel like some "moisturising" soaps I've tried - just a clean and happy face after shaving. 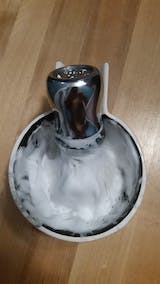 Because I am a fanboy of Portuguese shaving product and was so intrigued by the prospect of a black soap that produces snow white lather - which it does! -I had to order Pereira Shavery Charcoal Soap the moment it became available. And only two business days after Bullgoose received my order it arrived at my remote undisclosed secure location!

I've used this soap twice now and can report that it easily produces a copious quantity of lather than rivals my best (and more expensive) soaps (e.g., SV, MdC, ABC and AdlM Krokos) in terms of glide, cushioning and post shave skin feel. I'm favorably impressed and expect Pereira Shavery Charcoal Soap will become a regular in my daily rotation.

2 reviews
Alert subscription has been saved.
Failed to save subscription.
Subscribe to back in stock notification