The Seygus SSS razor utilizes the innovative Zeppelin head design. The "inverse smile" as well as other innovations increases the tension and grip of the razor blade which eliminates blade chatter and provides an extremely effective and smooth shave.

The razor is expertly machined from 316L Stainless steel in Spain to precise tolerances. The 09 model is considered to be an aggressive razor but, it is extremely smooth. With proper technique, you can achieve an irritation free BBS shave in only one or two passes.

I really like this razor. At first I thought the 09 plate might be too aggressive for a headshave. But it wasn't gave me a really smooth shave with no Nicks. I definitely recommend this razor to anybody that wants to add something unique to their collection.

Beautiful design, luxury shaver that makes you want to shave with this beautiful razor everyday. Love the easy grip handle design. This is one smooth shaver that works perfect with my favorite Feather blade. The Personna Red and Astra Green Blade works equally well too.

I’ve been wet shaving for over a decade now and ever since been searching for an everyday razor. I already own the 07/07, but this razor is remarkable. The absolute perfect blend of comfort and efficiency, even more so paired with a Feather blade. The price point is a bit scary, but after spending thousands on razors this is one purchase I will never regret. Cheers to Seygus, you knocked it out of the park with this one.

I ordered this on Thursday and it arrived at my mailbox Monday afternoon in time for me to get in a shave before supper. From some of the reviews, I was concerned that it might be a little aggressive but after the first pass it was not bad at all, only a little closer than my average first pass. I could not tell much difference from my normal second and third passes and I still had some clean up work to do. I was using a fresh blade that I had no previous experience with (Willy's). Even after all this, I still did not feel like the razor was that aggressive until I used the alum bar and received a good bit of feedback. After all was said and done, I had the closest, smoothest shave yet. My problem areas are still there but much improved over most of my other razors (and I have several well regarded razors). A little later I felt like I might have overshaved some but it is well worth it to get a shave this close. This might be a little much to become a daily driver for me but since I have so many good razors, it will fit right in to my rotation. I am looking forward to trying this razor with one of my favorite blades. I am well pleased!

Exceptional razor built to perfection. I feel a big difference from the 07 plate, this 09 is much more effective and with the weight of the razor it makes it very deep in the cut. The only small drawback is the grip of the handle which could be better 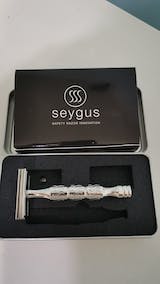